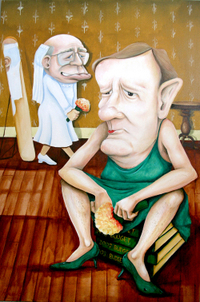 A friend of mine, Andrew Howells, has an entry in this year’s Bald Archies. For those non-Australians out there, the Bald Archies is an exhibition of paintings that parody Australia’s premier portraiture prize, the Archibald Prize.

Andrew’s painting depicts Australia’s Prime Minister, John Howard, as a bride, with his Treasurer, Peter Costello as the dejected bridesmaid. This reflects recent political events and neatly puts the situation into a typical laconic Australian context. Hope you like it!

3 thoughts on “Always the Bridesmaid?”