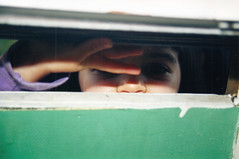 Dan over at RedAnt points to a good works campaign by realestate.com.au. The aim of the campaign was to use outdoor advertising to generate 100,000 clicks through to a URL that encourages us to "do something for kids" — specifically, to take on one of the 200 foster kids that need a safe home this Christmas.

If the 100,000 target was achieved, then the company would donate the remaining billboard space to this promotion.

Dan has a number of points about whether this promotion was successful or not — but what struck me most was the lost opportunity. Now I live in Sydney and keep an ear out for viral projects and good works … but the first time I hear about this particular campaign is when it is over.

Luckily, realestate.com.au have continued to support this cause — but I can’t help but think, that with a little extra strategic thinking, much greater traction could have ensued. Surely 100,000 clicks is a small target — and the potential to impact young lives is a worth more than a karma credit or two.

So if you live in Sydney and are interested in becoming a foster carer, take a look at this site.