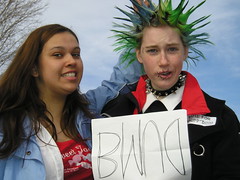 So you have all been spared a rant for a while … but this has been bubbling away for some time. It was fuelled by this great post by Ann Handley and the comments from CK.

Some time ago I am sitting in a meeting room. I am there as a guest of my client, along with a number of other people representing various agencies … and the conversation swings around to the online world … to the web, the value of sites, blogs, portals and online ad spending. The discussion was being led by the head of one of the big media agencies and all in the room were nodding in agreement with the general flow of conversation/presentation. And then came the bombshell … "ah yes, but you can’t measure the web".

I thought I must have misheard. I looked around the room and the nodding continued. Then I realised that I was just living in a parallel universe … the one where SOME people get the Net and others don’t. Unfortunately, my world was the lesser populated.

Now I could have jumped in and launched a tirade … but I paused. I wanted to understand why this perspective was held. I am quite immersed in the world of the web and interactive media, so I wanted to hear what was going on in this strange other world. So I sat on my indignation and listened … I expected to find out that the focus of the measurement argument was around protecting the lucrative media placement business. But it was worse …

The "lack of measurement" claim was actually about owning "strategy". By pushing forward with a measurement system built around mass media — TV and radio — and using the sampling provided by rating agencies around the world, this agency was claiming the strategic highground — based on their research and demographic analysis. I shook my head and wondered if I was hearing right!

The reason that no one in the room thought that the web was measurable was because they were trying to use the WRONG system of measurement. They were viewing the web as just another channel … like TV and radio. They were talking about (can you believe it) banner ads and interstitials. They were wanting one-to-many broadcasts (and associated metrics) without understanding that you CAN have one-to-one narrowcasts (and better, targeted metrics). Not only did this agency (and the others), not understand the web and its potential, but they were actively discouraging their client from experimenting and innovating. And they were trying to AVOID helping our client build real, interactive relationships with customers.

Interestingly, I noticed through my web analytics, that certain agencies were checking our names and histories … and ended up here. How do I know it was them? Google Analytics lets you cross-analyse data in all sorts of fun ways … I even know what kind of computer they use and the screen size of their monitor. No measurement? Ha! Sounds like a job for this chap below (thanks to CK for the reference).

5 thoughts on “Some Agencies Just DON’T Get It!”