This is a powerful piece of storytelling. It is raw, powerful text. It is reality writ large.

And while you can watch it below, take my advice. Immerse yourself. Click here.

More to come on this. As there should be. But I will leave it with you for now.

Via Katie Chatfield and Luc Debaisieux.

When we think of social media, we often think of younger people. We think of people who are fully-immersed in the world of Web 2.0 — a 3G iPhone in one hand and an attitude ready to take on the world and win. But even a cursory trawl through the wonderful world of the blogosphere will show that there are many others using social media to connect with their friends and others with agile like-minds.

Last year I marvelled at the spirit of the world’s oldest blogger, Olive Riley. And while her story was mediated — discussed and typed up by someone else — Olive soon found that there was a certain pleasure in conversing with people from all over the world. Being 108 years old, Olive was able, through her blog, to share snippets of her life — reflections on her childhood as well as current realities — in a way that is often overlooked in the rush for the latest new thing. It is clear that Olive was a master storyteller — her personality, sense of humour and zest for life (even her crankiness) all coming through in each and every post.

Alas, Olive’s last blog entry has been written. Over the weekend, Olive passed away peacefully. May she rest in peace.

Growing and nuturing talented creatives is a long term project. It takes time, talent, focus … and it seems, plenty of fertilizer. But the rewards are significant — the ability to distil the "creative juice" that is needed for the demanding advertising, online, direct marketing and game development industries can provide significant competitive advantage. Watch this video to see how one region in the UK has been harvesting creative talent for generations. With thanks to Kris Hoet at ‘Cross the Breeze.

A car purchase is the second most expensive investment that an individual is likely to make (the first being their home). And in that respect, consumers come close in behaviour to their B2B counterparts — after all, vehicles are expensive, have ongoing cost requirements and (whether we like it or not) reflect on our own sense of self. Accordingly, when it comes to purchase time, we shop around, do our homework, check blog posts, search engines and customer satisfaction ratings. We ask friends for recommendations, take a keener interest in the cars we pass in the street, and think through the implications of this major purchase.

Recently though, the greater awareness (and concern for) the environment, coupled with ever spiralling oil prices has seen a massive spike in the popularity of hybrid cars. (Some US states have gone so far as to mandate the production of eco-friendly cars.) But, even a cursory glance at the prices of hybrid cars shows that they are significantly more expensive, meaning that you will need a longer timeframe before your hybrid car breaks even with its petrol equivalent.

However, there are other factors at play in the calculation of ROI — and Todd Andrlik has developed a great online tool that brings carbon emissions into the calculation. Originally developed to assist his employer, Leopardo Constructions, in calculating the ROI impacts for their fleet of company vehicles, the calculator has now been made widely available. Simply enter a few variables about the vehicles you are comparing, press calculate, and you will receive data about fuel savings, unreleased carbon emissions and ROI timeframes. Check it out here.

It is a wonder that companies like Toyota or Honda, makers of leading hybrid vehicles have not produced something similar.

Katie Chatfield shares this great presentation at TED by Benjamin Zander. It takes 20 minutes to play, and at its completion, you will come to love classical music.

Six minutes in, Benjamin positions this transformation beautifully — in terms of leadership. As he says, “one of the characteristics of a leader … [is] that he not doubt for one moment the capacity of the people he is leading to realise whatever he’s dreaming”. But then, Benjamin spends the rest of the time taking us on a journey, inviting us into his own story and into the story of the music which is his passion. He explains how the music taps into our emotional intelligence and then demonstrates its power by asking us to go deeper into the music — to make it personal.

He wraps up this artful talk magnificently with anecdote and personal story, explaining his own revelation — “My job is to awaken possibility in other people”. Fascinatingly, he also demonstrates how you can tell when this has been achieved … but you will need to watch until the end to understand. Not a bad way to spend a lunch break on a Friday afternoon. Enjoy.

When brand marketers are considering social media, the first question they ask is what is the ROI? After all, most marketers have been trained to believe that every piece of spending has to have a short term return to their brand — hence the idea of the campaign. (Perhaps this is why Corporate Social Responsibility (CSR) has taken some time to gain traction — though that is the subject for a whole other post.)

But what happens when your return is uncertain? What if the potential returns remain beyond your measurement horizon? Or outside of the normal market boundaries in which you operate? This post, Where the Hell is the Sponsor?, about Matt Harding’s dancing video has received quite a bit of traffic over the last week or so, and has generated some great conversation. And this morning, the great connector, Christina Kerley, referred me to both Mario Sundar’s post on Matt’s video and the New York Times article on the infectious nature of the video which has generated around 4-5 million views.

Think about the value here. There are 4 million people around the world willing to sit through almost 5 minutes of video. These people are receptive to the simple brand message offered by Stride Gum. That is 20 million minutes of brand engagement — opt-in. That is the equivalent of one person spending 38 years watching your brand message — in good faith. And I have a feeling that this may well go a whole lot higher now that the NYT has begun spreading the news. Now, not all videos or brand activations will "go viral", but the niche targeting and the goodwill halo achieved (if you have good strategic planners working for you) with only a moderate number of impressions can generate a significant amount of roll-on coverage, PR, blog reviews such as this — and a whole lot of offline discussion.

Developing the ROI for social media is not an easy measurement, but it can be done:

… and before you know it you have a fairly powerful model that will make your jaw hit the floor.

And if that is not enough, the shouty, Katie Chatfield raised yet another perspective — that it is not about the return on investment, but about managing the risk of NOT participating in the conversations that are ALL ABOUT your brand.

Where the Hell is Matt? (2008) from Matthew Harding on Vimeo

Special thanks (again) to Ian Lyons for introducing me to Where the Hell is Matt!

To celebrate Hello Viking’s first anniversary, the entertaining Tim Brunelle is inviting all iPhone and iPod Touch owners to a "viking smackdown". The smackdown takes advantage of the inbuilt motion sensor — your challenge is to acheive the highest score by August 15, 2008. If you do so, you will, in Tim’s words, "win big":

We’ll fly the winner to Minneapolis, put ‘em up in a fancy hotel, then give ‘em a really large birthday cake and the chance to throw it at our CEO—all broadcast on the Internet.

So if you have one of the aforementioned Apple devices, glide over to www.vikingsmackdown.com and join in the fun. Now, I wonder if that prize covers non-US vikings?

The months of June and July 2008 will have seen two major initiatives aimed at bringing the Web 2.0 and publishing industries together — Pubcamp organised by Jed White’s iTechne, and The Future of Media organised by Ross Dawson’s Future Exploration Network. Here in Australia, this is big news, and indicates a significant shift in the business perspective of both groups — clearly there is a need to bridge the gap between what can roughly be described as "New Media" and "Old Media".

Yes, that’s right … the future of media is going to touch each and every one of us. The impact of the shifting balance between new and emergent forms of media and "traditional media" will be far reaching and may, perhaps, change the nature of the business landscape for years to come (of course with the rise and rise of Google, it could be stated that the game has changed irreversibly). But as Alisa Miller points out in this TED talk (vis ShiftedPixels), the media has taken a particular, and distorted view of storytelling in recent times. And, it seems to me, this myopic focus on easily digestible stories, has fuelled the growth of social and new media enterprises — our interests and curiosities have not been sated and we have begun to look elsewhere for those stories.

As Alisa points out, younger Americans know less about the world today than their counterparts 20 years ago. However, this is not an indication of a lack of desire for knowledge — it is the result of the homogenisation and filtering of what is considered "newsworthy". Even the great winner in the new media stakes, Google, can be considered guilty here — with "Google News" also opting for narrow focus storytelling in a broad vision world.

With an ever increasing number of people participating and contributing to emerging forms of media — and an understanding that we, as media consumers spend more time viewing both "traditional" media online as well as new media sources — it is clear that our strategies for engaging with our markets/audiences/consumers require new approaches. It seems that we need to re-think "media" itself — and stop talking about the divides I have reinforced above. Perhaps it is not about "media" but about the people that the "media" want to reach and engage. And if we start thinking about this, if we start putting communities at the heart of our storytelling and engagement strategies, then maybe we can begin to move forward together. 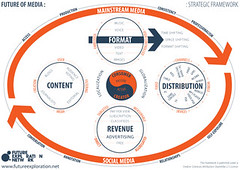 Ross Dawson has consistently been thinking through the future of media from a business perspective for the last few years. In 2006 Ross developed this strategic framework which still holds great value for organisations yet to come to grips with the opportunities and challenges of Web 2.0 (and let’s face it, that is the majority).

If you are in Sydney (July 15) or in San Francisco (July 14), you can register here … and participate in the live conference, the city-to-city live hookup and in the unconference sessions that are bound to bring some life to the proceedings. After all, where else are you going to get this array of speakers for one low price?

And if Pubcamp Sydney was any guide, there is bound to be a healthy Twitter back channel in action — and with luck — a vibrant series of unconference discussions.